The ivory figurines come to life turn out to be a tall, muscular male human (Smersh of Urlil) with cheekbones to die for, and a Shevam woman (Fetnah), the human stands protectively in front of the Shevam as they ask who these people arew whilst coming to terms with memories of being overwhelmed by undead cultists. Both snatched up knives from the treasure at their feet, prepared to defend themselves.

Despite the archaic language of Fetnah and Smersh, the lure of treasure proved a universal language. The hoard of copper and tin was ignored, in favour of boxes of ointments (also an inscribed copper sheet) , tablets and gold jewellery and a black scroll case covered in necromantic symbols as well as small possessions of Fetnah and Smersh.

The group reacquaint themselves with their surroundings, and become aware of the statue of Kabbaruk, holding mace and model of the house they were in, and behind that, the looming embrace of Ilot-hahas (as Smersh and Ftenah know her, Lotnyas as Arpaesis and Jalabu know) with her five dragon heads. Moreover, the group realised that, in the ancient Sorceror-King, they had a common foe, though it seemed centuries separated them. Urklil was known to Urtana, a town long since lost to the sands of time.

Smersh removes the mace from the statue and lays about it with great force, in doing so smashing the model of the house, with a fading gloom the group find themselves outside the house, which has disappeared.

As they familiarise themselves with the road, and the road with an archway of trees, the two children they saw before wave over to them, the ghost child, who was with them, drifts over back to attend Arpaesis. The children again beg for help against the monster, and for aid for their mother.

Confused, the group speculate about time, and  circular events, but José, Arpaesis and Fetnah get hints that it is more, and less than it seems, that the children are illusory bait somehow connected to the house, after all, the children made theur farewells shortly before when their bones were laid to rest, and so they enter the tunnel of trees. 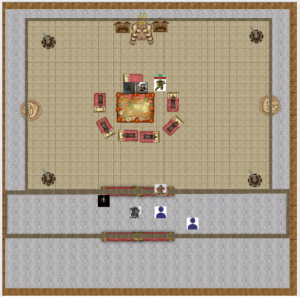 However, in doing so, they found themselves back at the door to the audience chamber of Kabbaruk. The bodies of the deadadvisors remain on their couches, surrounding a metal map of Kabbaruk’s former empire, lit by green lanterns that remind one of the light of the comet and a scent Jalabu recognises as a spice used by addicts to flavour a certain drug.

Their King rises up to face the group. Smersh, armed with his dagger, proves fast, moving up as Jalabu, Utana and José bravely loose solvered arrows from the doorway. Utana’s first strike is particularly well aimed, but the undead thing seems remarkably resistant to damage, despite taking blows that would have instantly killed a mortal.

Whilst the warriors loosed arrows from a distance, Smersh and Farshad  got in close, though the damage they did was at a cost, cold numbed them and the undead seemed to grow no weaker. It was realised that his unmoving advisors were restoring his fabric. The attention of the group waa switched to destroying those unmoving accomplices.

Since her revival, Fetnah had been feeling an emptiness, a loss, her friend and Ally, the spirit Ibalkia, was not there, not in the house beyond the world and not, at first, here, and yet, now, a glimmer of recognition, a voice in her head “Where have you been? I’ve been worried sick, you never write, you never call..”

Kabbaruk was responding with spells of choking, claws of ice and even a vlast of artic air that Smersh nimbly dodged, in addition to having survived enough damage to tenderise an elephant into elephant tartare.

Arpaesis reached out with his arcane sight, but whilst he realised that an item of great power was hidden under the metal map, the sight if it blinded him temporarily. He sought to get closer to the table, stumbling forward, but, just as Smersh realised that the ghost child was a form of Lotnyas known as “The Deceiver”, it was too late to warn Arpaesism the child hurled him across the room, slamming him against the wall, fufilling a prophecy of the witch near Bukrish “Beware! There is a sword blade with your name graven on it.”

Reunited with her ally, Fetnah loosed an attempt to drive the spirit of Kabbaruk from his corpse. She partially succedede, stripping away a familiar he had bound to himself. Not only was he no longer getting reconsituted by his advisors, the cold that damaged those that struck him, and the attacks chpped away at his being until, struck down, Smersh made sure of the job with the mace, beating the corpse to a pulp, and The Deceiver faded away.

Under the map was found a bronze tablet, covered in characters, one that had brought Smersh and Fetnah here to end a blight in their own time. An exhausted and bleeding Smersh removed it, wrapping it in cloth as Fetnah and José attended to the wounds of the group. Farshad looked on with disgust and possibly resentment when after receiving a cursory bandage on his injuries, saw Fetnah summon spirits to refresh all of Smersh’s lost energy whilst José showed an incredible deafness of skill and experience in sewing up Smersh’s wounds that Farshad was nearly speechless with indignation. But only nearly.

After the healing, Smersh led a spluttering Farshad, and the rest of the group, outside to the courtyard and fountain in the middle of the palace complex, as they went, they gathered a group of the mobile dead, staying at a distance, but surrounding the group on three sides.

The fountain still contained objects that were marked by bright light, so that their form could not be distinguished, but they were Isobel, This time they decided to chance reaching in and withdrawing

with more points of light, Jalabu reached in again, only to find his arm severely numbed with a painful cold.

Utana wondered aloud “I wonder what happens if I reach in again?”

“well, I got my arm numbed by a painful cold” answered Jalabu!

Utana, whether heedless of Jalabu’s pain, or with scientific curiosity, or a belief that somehow any cold that didn’t cause Jalabu’s arm to shatter and drop off wasn’t really that cold, reached in again, yet he too was bitten by the frigid temperature.

They decided to leave the fountain alone, save that Smersh used it to brace the tablet against as he beat the bronze tablet and characters into a shapeless mess, the surrounding undead sublimated into a green dust that swirled around the group in a cyclone and sooner than they could click their heels together three times and say “There’s no place like home” they found themselves at the stone circle near the path under the mound, only the path was gone and the stones no longer had a shining gems in it.

And there we left it