The group looked at the ladder going up to the floor above and Utana, sticking his spear through his harness, laid his hand ready to go up, the air shimmered and Utana was replaced by a surprised Jalabu. Another shimmer and Arpaesis appeared. Juan José and Farshad quickly filled them in with what had been going on and it was noticed that the ghost child who had been following Arpaesis was not to be seen.

Triggering the light spell on his shield, Utana ascended, finding himself in a disty, cobwebbed empty space with four doors leading out. From how far they had risen up, it was believed that they were near the top. Looking around, Jalabu secided to take the doors clockwise from the south.

The room to the south proved to be some kind of lounge that could be opened to the elements, possibly for sleeping when the nights were hot and humid. The room to the west, a storage room full of rotting boxes and, to the north, a screen. Behind that, Jabu found a frame upon which a body had once been hung, now bones were scattered around and enough cloth fragments to identify the remains as those of the woman found in the bedroom with the adult and two child-sized beds. Farshad, examining the area more closely, found an openable panel, behind which opened up a shaft, with ladders leading down.

The group decided to check out the other rooms first, the first seemingly a servant’s room, but the second and last was locked from the outsid. Opening the pinned bolt revealed a room made into a makeshift bedroom. The were piles of used utensils, a comfort corner and a third corner with two small beds of rags and a chest. Investigating this chest of sad and simple toys, and a bed concealing small, human bones.

The group were aware of two, small, child ghosts, the exact duplicates of the children that they had met outside but these knew that they were dead. They were friebdly enough, but also did not want to be abandoned and seemed upset at the notion, so Farshad suggested bundling the bones, and looking for family grave or crypt.

They went back to the ladder down, uncaring of how the child ghosts might view the remains of the person the group suspected was their mother. As Jalabu hit the bottom of the various ladders to the space at the bottom of the shaft, he became aware of a low, unintelligible, guttural chanting. He became obsessessed with finding the origin of this, leading on, ignoring side passages, having almost to be restrained as they passed the slab covering the tomb where the children, and their mother were meant to be interred.

Jalabu grumbled as José get it uncovered and Arpaesis and Farshad laid the bones in their coffins. The children gave the two one last hug before vanishing from sight. In the hands of each there was suddenly a gem, a bluish white gemstone that Farshad identified as a very rare form of emerald (in that you don’t get blue-white emeralds, which is why it is rare and Farshad knows it). José had a slightly different reaction, his empathic sense gave him feelings of tears and regret, Arpaesis has a niggling feeling that it has an Arcane purpose, but whilst he cannot call it to mind, he knows which works to consult to find out, when he can get to a Library.

Impatient, now that is over, Jalabu leads the group on, again ignoring side passages, coming to some kind of changing room in front of double doors, covered in brass plates depicting, in relief, worshippers bowing before a figure, behind whom was a large version of the five dragon headed woman they have seen in statues and paintings often of late.

Jalabu, confident and eager to prove his skills in the stealthy arts, looked to the door for traps or tricks, he stumbled hard against them, and the doors swung open to reveal a shrine of some kind, four robed people bowing to the shrine with statue version of the relief on the door, Kabbaruk in front of Ilot-nahas in dragon-woman form, treasure scattered in front of them. 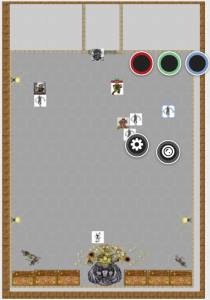 Must be a combat, the GM has spent time on a map

Jalabu picked himself up, José stuck with his bow and silvered arrows as the figures turned and intoned

The figures, mortal but looking as if they have long been decaying, looked at the newcomers, possibly expectantly?

They repeated their chant and, not being answered, they moved to attack, hissing and claws out. The rearmost figure started creating a spell.

Just as well that Arpaesis cast a spell of protection, as a spell failed on José, arrows flew from jom back at the oncoming horrors. Farshad found his attempts to sneak around the edge of the room failed and, already seriously injured (like a smaller version of José in a way). Jalabu twirled his moustache, realised he usually let Utana take point and thought “By Jove, I think I am the tank!“. He acquitted himself well, fending off two attackers at the cost of fatigue as he moved like a blur, fending off attacks.

Although silvered weapons cut away at the rotting cultists, claws ripped at Farshad and cold infused him, slowing him down. Despite his protection, Arpaesis found the very air solidify and throttle him but, at the cost of an even more battered Farshad, the foes were vanquished.

Then attention was grabbed by the idols, in amongst the treasure were two exquisitely and realistically carved ivories, two mortals exact in every detail. They started to shimmer, and grow, becoming two fully sized mortals. There was a sense of “Dearie me, what now?!” from the battered group then, one of the figures opened their mouth and said “Hello, where am I?” in a very archaic form of Idarit.

And there we left it.