For the past few months, I have been playtesting the, under-development, Midgard Heroic Battles by James Morris (https://mogsymakes.net/). These will eventually be released by Reisswitz Press (aka Too Fat Lardies) but there is no release date yet.

Midgard uses armies built up of units comprised of figures mounted on set bases 120mm wide and tables at least 6′ by 4′. As I started during social distancing, and we don’t have the space for the usual sized table, so I used 40mm wide bases (from Games Workshop’s 2005 “Battle of Five Armies”) and a smaller battlefield, either 2′ by 18″ or 3’x 2′.

In Midgard, whilst units have the usual attributes of attack, how easily they suffer casualties and how many casualties they can endure, the real thing that causes armies to fall apart, even while they still have a coherent force on the field, is their morale.  If the army’s morale fails, the army falls apart.

The things that can cause an army to falter are heroes not living up to their name, or units being destroyed, what bolsters an army are those heroes leading from the front and doing deeds of reknown.

Midgard uses a mixed phase turn, in the main each phase belongs to one side, attacker then defender, rather than standard IGOUGO, and I found it a very fast game, with straightforward rules that gave me a feel of a decent core set of rules that give a good feel of handling “straight” wargaming, as well as fantasy with a better feel for fantasy than I have seen in decades.

And so to a battle report

The Threat to Laketown

It is the Third Age of Middle Earth, rumours abound that Sauron, though still bereft of the Ring, has grown in strength. Word has come from the Elves of Mirkwood that two of the Úlairi, the dark shadows bound to Sauron, are leading Goblins. including warg-riders, trolls and bats north through Mirkwood to assault Lake-town.

A blocking force of Iron Hills Dwarves and Men, aided by Saruman the White, Gandalf the Grey and some of the Great Eagles seeks to drive the invaders back.

Specific rules for this battle

The terrain is a forest, the units can pass ‘through’ the trunks, but they are rough terrain, slowing progress. If the Free People units are forced off the field of the battle then they are gone.

Seeing as I used a Loke Battlemats book for the battlefield, with a comb in the centre, I just have to live with it, if units need to cross it then they measure to the edge then from the other edge, units can be either side of the comb and in contact. This also means the distances are 1/3 of the “rules as written” distance.

There is a ruined fort astride a road defended by the Free Peoples. If the Evil armies clear that ruin, then they have opened the easiest route to Laketown, Dale and Erebor, and gain a boost to morale.

The Evil Forces are the Attackers in this battle and start first.

Sauron’s evil forces are led by a Nazgûl on fell beast. The lesser commanders are a Nazgûl on horse, a chieftain of goblins, lesser goblin champions including one on warg and a troll chief. They lead 12 units of goblins, three of trolls, three of bat swarms and two units of warg riders.

Good is commanded by Dain Ironfoot, who has two lesser dwarf commanders under him. They lead six units of dwarf warriors and three of dwarf archers. The Men are led by King Brand of Dale, who has three units of Men with spears, and three of Men with bows. Aiding them are Saruman the White, with Dain at the ruins, Gandalf the Grey, with Brand, and three groups of the Great Eagles of the Mountains.

The line of evil advances, most of the goblins in columns under their leaders, though having to maneuver through the trees, as well as units failing to respond to the urging of their leaders, means some fall behind, slowing the advance. Clouds of bats fly through the forest under the watchful eye of a Nazgûl on Fell-beast, positioning themselves to strike ahead of their advance. 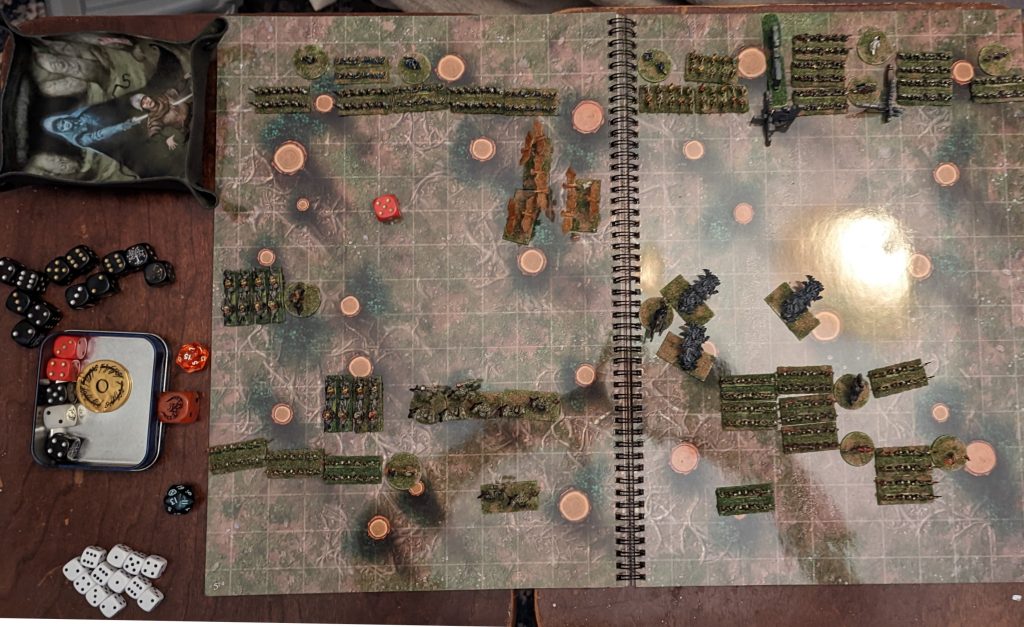 The Free Peoples, aim to hold the fort ruins and the road, but, outnumbered, find it hard to counter all the lines of advance, and themselves spreading their main strength to the wings, leaving the centre held lightly by Dain’s archers. 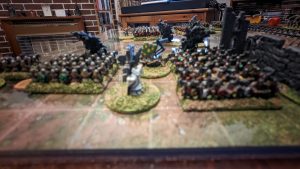 On their right, the Warg riders try to outflank the Men, but the Men move to intercept, weakening the centre further, the Dwarves holding the ruin are struck by swooping bats, though to little effect, despite the bats being frenzied by Nazgûl sorcery. The bats are pursued by the Eagles who drive them off, starting a chase and dogfight across the battlefield. (I used the rules as they were at this draft, I believe they have been updated with more specific aerial combat rules). 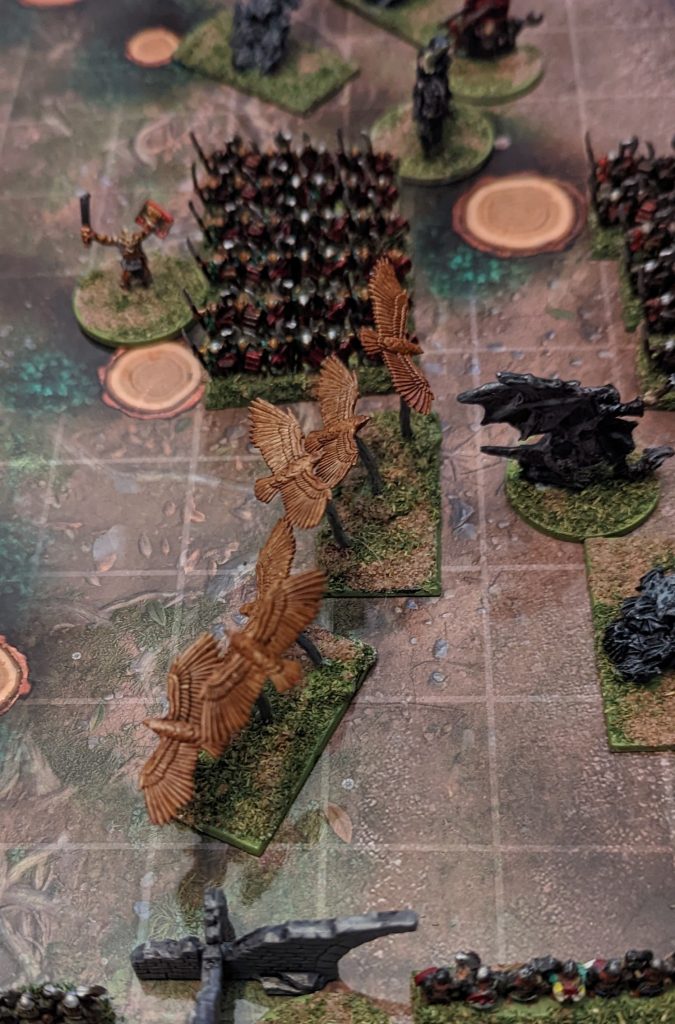 The first attack by the warg riders was repulsed, the unit destroyed, the goblins and trolls suffered light damage from archery, but the advance continued, the lead goblins under command of a champion. He was called out by Dain to single combat and, overmatched by Dain, the goblin leader was slain, and that attack faltered.

the counter attack by the dwarves was so savage that it not only slew the unit facing it, but managed to inflict casualties on the unit behind it, which must have perturbed the goblins somewhat.

The Nazgûl on horse joined in the next attack, the Nazgûl’s dread aura causing fear in the ranks supporting Dain’s front line, and it was only due to the words of Saruman that the line held. The remaining warg riders held back and loosed arrows at Brand’s warriors but they suffered losses in return, but that pinned Brand’s forces in place as the delayed trolls and goblins got closer.

On Evil’s left, the superior numbers of the goblins was grinding down the dwarves, despite the bolstering from Saruman, at the cost of heavy casualties themselves, the superior armour and determination giving the dwarves a slight edge over their foes.  High over the middle of the  battlefield the units of bats split up and tried to get the eagles into a position of disadvantage. The Free Peoples can ill afford the losses but overall the morale of Sauron’s slaves is suffering more.

To raise morale, both sides use leaders to charge in with the warriors, however that backfires for the goblins as one of their champions is killed, but the Free Peoples also suffer as the Trolls hammer Brand’s Men. Brand shows courage, challenging the Troll’s leader to single combat, which he wins, slaying his foe.

The Nazgûl general on Fell Beast flies over to take command of that side of the battle, the other Nazgûl routing the light dwarf screen of archers in the centre, this allows the goblins there to try and flank both dwarves and Men. In response, the Men move to their left to shorten their line, and join with the dwarves.

Gandalf, having joined a unit of men, engages  the mounted Nazgûl and wins, though he is wounded and rendered less effective, but the unit of Men he attaches himself to destroys some goblins. 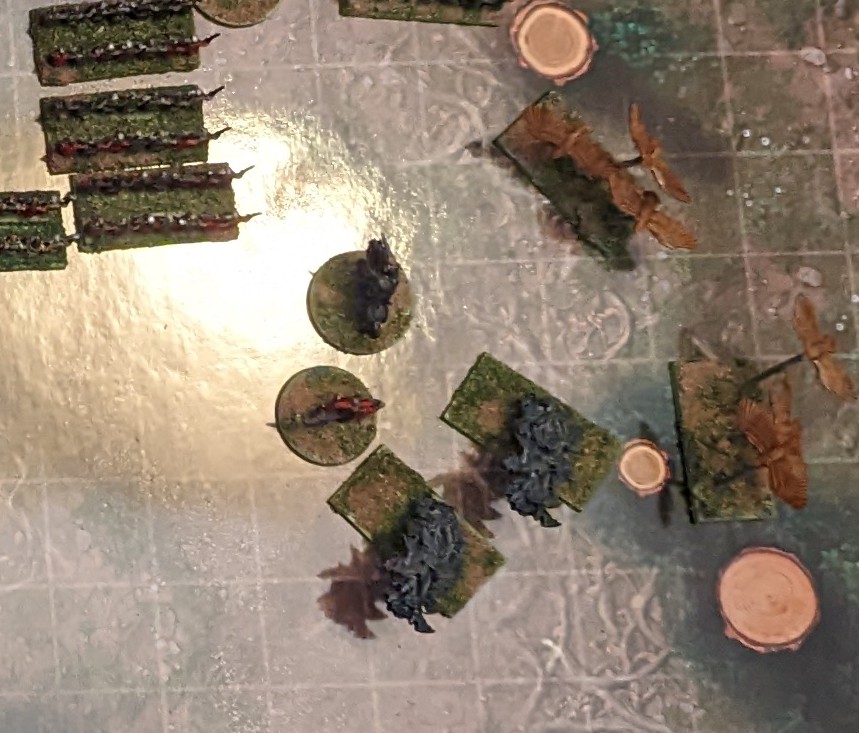 The bats did manage to wound one unit of Eagles but at the cost of two units of bats, and the Eagles started to swoop down and injure a couple of units of Goblins, one of which breaks and flees.

Both sides are broken into two separate battles but, overall, the losses on Sauron’s side have been great, and with the repulse of the Trolls, their nerve breaks and despite the screeches of their shadowy commanders, they flee the field. Laketown, Dale and Erebor are safe, for today at least.

Although points costed, Evil was costed at a little over 10% higher than the Free Peoples, giving them one advantage, and the Free Peoples had a strong incentive to defend the ruins, or lose morale, making their life more difficult but, despite that, this was a fairly fluid battle with some maneuver, mostly from Evil as they had the advantage in numbers and cavalry.

I know from previous play test games that when both sides have cavalry then they can cause infantry problems if the battlefield is not just an edge to edge line of troops, but not even they are as mobile as wheeling and dodging flyers. I look forward to see the completed rules with their updated aerial combat rules.

This entry was posted in none yet, Solo Wargaming, Wargaming. Bookmark the permalink.