The Old School has more than one classroom

A missed opportunity in the Golden Age of RPGs

For a few years now, thanks to dedicated writers and easier routes to publishing, there have been nostalgic attempts to recapture the *feel* of older role-playing games, mostly “Dungeons and Dragons” using either the OGL d20 system or a house system. I have argued that, to me, Dungeons and Dragons 5th edition is itself a retroclone,an attempt to recapture it’s earlier, simpler self, after the excesses of 3rd and 4th editions. 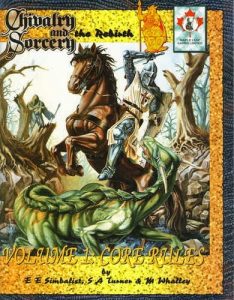 Book one of Chivalry and Sorcery: The Rebirth

This is not a new thing though. Another game from the start of the hobby had a larger edition attempt to recapture something of an earlier edition. That was 2000’s “Chivalry and Sorcery: The Rebirth” aka 4th edition. That attempted to marry the new system introduced in 3rd edition with the feel of 2nd edition. Second edition C&S had potential to be something else, something great enough to wrest focus away from the behemoth that was 1st edition, and I think it should be celebrated more.

Firstly, a bit of history. When D&D first come out, in its 3 books in a box, people saw it was not perfect and started to tinker with it.The magic system and the combat system were frequently “house-ruled”. People also had an appetite for a premade world, which seems to have surprised Gary Gygax, who seems to have enjoyed making his own and seen that as part of the game.

Into this enter two Canadians, Ed Simbalist & Wilf Backhaus. They had produced their own manuscript (Chevalier) for an “advanced D&D”. This would reform the game to have a definite place, a feudal society patterned after that of England and France, it would have a more realistic combat system, mages would be students of esoteric lore, rather than support weapon teams and clerics would be part of a functioning religious structure.

C&S 1st edition, the Tolkien influence was strong then

They took this to Gencon in 1977 to try to sell to TSR. They saw Gary Gygax berate a TSR staffer and, in their words, looked at each other and said “not to that guy!”. They ended up selling it to Scott Bizar of Fantasy Games Unlimited, changed the rules away from D&D, renamed it “Chivalry and Sorcery” and a classic was born. This had everything. Character generation included hobbits and more Tolkien-like elves and dwarves, but you could also play as a monster, orc, vampire or the like.

Chivalry and Sorcery included everything. Sets of pre-generated NPG and Monsters over a range of levels. Goblins need not be stuck at level one, dumb targets any more. A range of mage types, some of whom made better NPCs than PCs, Secret Magical Societies. An essay on Feudal economics, essays on Gamesmastering, an entire figure wargame, it was all here, photo-reduced so that 4 typed pages became one eye wrenching page of tiny text. It was more complex than D&D, combat and magic had so many more options, but it also had more depth. It wasn’t as gonzo as D&D, which may be a matter of taste, and it was such an eye-opener on what RPGS could be, that I didn’t play D&D for over 30 years, missing out on AD&D2, D&D3, D&D3.5 and D&D4.

Chivalry and Sorcery served me well, the base settings was expanded with other cultures, including intelligent dinosaurs and crocodile descended people in their on “Lost World”, other facets of medieval life, essays on world creation and games-mastering and the siege game for all society, “Drop the Rock”.

Cover of book one of Chivalry and Sorcery 2nd edition

Then, in 1983, 1 walked into the games shop to find a box on the shelves, a new, 2nd, edition of C&S. Rather than a densely packed single volume of everything, we now had three separate volumes,

And all in text that you could actually read with the unaided human eye. The system had changed slightly, particularly combat which allowed for a D20 alternative to percentile dice , but the first major shock was in character generation.C&S 2 characters did not have the completely random draw from life that C&S 1st characters had. You could design your characters using a point cost system, though you did have a random number of points to buy things with.

And characters had always started off at a random age, but irrespective of age they were level one, assumed to be the same in skill and experience.

No longer. Now we had a system of previous experience based on age (pro-rating) It was complex, as you calculated the experience points you would have gained prior to play, but here was the thing, you used those points to buy skills. Previous experience was not a new idea, Rune Quest,Traveller and DragonQuest all had them, but in a class and level system? The whole point was you had levels. That was your experience. Your previous experience of live was encapsulated by being level one and not level zero.

As for buying skills? Skills previously had been class limited, thieves thieved, knight could use the good weapons and armour and foresters knew when the deer were to hunt. Now characters could buy skills outside their “class”, you could create your fighter with a few spells or thief skills, or a mage who knew one end of a sword from another. They were unlikely to be as good as a specialist, and have their fall range of class skills, but you could have them. My necromancer of Royal birth had the skills at arms expected of a knight, the flip side was that his magical researches went not as advanced as they should have been. C&S stepping away from class and level would continue in 3rd and Rebirth/4th editions, which are more skill based, but Class (Vocations) still matter for the ease with which some skills are learned over others.

This is why I subtitled this as a missed opportunity. You had a strong lineage of a game, well known, if usually as a game people used as a research tool rather than played, revamped as a more responsive character system. Where it did not take off is probably in part due to the reputation for complexity that was still deserved by this second edition.

Comparison of text size of C&S 1st and 2nd editions. The 2nd edition size isn’t that much bigger, but it is bigger enough to make a difference!

Both combat and magic are still involved. This was a deliberate design decision (the player was expected, for example, to be an expert in how spells their character had worked in the system, as almost a live role-playing equivalent of the complexity the character had to go through to shape natural forces. So much so that looking up the rule-book for spell details was forbidden to players of mage characters! This is a definite illustration of the 70s and 80s idea that modelling realism required options and control, but with the downside that events that would have been fast in “real life” took a really long time to work through. C&S was not alone in this, many games of the time had that flaw.

Although I loved this at the time, and we could get through things quickly enough once we had done them a few times, in retrospect I prefer a more streamlined, abstracted approach, even if I am incapable of designing one myself 😉

There are other oddities too. In a Class and level game like D&D, hit points go up with levels as an abstraction of increased defensive skill in a game without defensive skills. C&S has defensive skills, parry, block and dodge, that increase with the experience of the character, so it is a bit silly that Body Points increase with level. I assume a hold over from “Chevalier”. I loved that you could still play as a monster or stereotypically “evil race” such as goblin or troll, that Monastic Fighting Orders were there to explain “Paladins” but I missed the weird esoteric Magical Orders that Mages had had in C&S 1st, long before Ars Magica.

So, what would I like to have seen Ed and Wilf do to nudge it over into perfect. Expand the skills system into a true skill system, use the experience to measure level progression, but also buy skills with that XP, rather than have automatic skill progression in the vocation.  Categorise them by vocation so that you can apply penalties for other vocations learning, but let anyone learn anything. Do away with some of the derived stats like PCF, make them weapons skills purely.

Simplify combat a bit, using the weapon weight/bulk as a factor versus the Strength or Dex of the character to see how many blows they get in. C&S Essence does that sort of thing. Magic would also be a skill but, given my own experience with Essence, I am not sure I can capture what the guys were trying to do with a much simpler system, but I keep on trying.

I recently played a revamped version of RuneQuest 2, one of the other popular non D&D games at the time, and one well regarded for its combat system. That built in the concrpts of the relative speed of characters and weapon, of the potential deadliness of combat, and having been influenced, like C&S, by author experiences with the Society for Creative Anachronism. However I think that time softens the memories somewhat. While combat can be faster if you get some solid hits in, it can also be a long slog, which is actually also true of D&D and C&S. Both those games can have combat speeded up in a number of methods, and C&S has one of those methods, the Critical Hit, as an option. Use that and the combat becomes faster and more deadly. Mages should still steer clear of a fight though.

Chivalry and Sorcery 2nd edition is a good RPG, suffering a bit by its reputation deriving from the 1st edition, and needing a bit more time and care to tweak it. It shows why it engendered so much love that when Steve Turner and Ed Simbalist decided to create 4th edition, they chose 2nd edition as the model, not the extraordinary 1st edition or the more closely related, in terms of system, 3rd.

It is the edition of C&S I turn to when I want to try and capture the flavour of C&S in something I’m writing. It’s the edition I most used when running a play by email game and I so, so need to get a game of this again! Dammit!

This entry was posted in Chivalry & Sorcery, none yet, RPG. Bookmark the permalink.