Title from the box of 1st edition

Astonishing Swordsmen and Sorcerors of Hyberborea (ASSH) is a fantasy and horror role-playing game set in a world combining the feel of Robert E. Howard’s Hyborean Age with the pulp horror of HP Lovecraft and Clark Ashton Smith, which is fair enough as that is what Robert E. Howard did. It can be set in any campaign but the default setting is kind of a far future, Dying Earth exhausted world with bits of Moorcock and others thrown in.

Single combat matrix for all classes and levels

It is a “old school” class and level RPG, being modelled after original and Advanced D&D, in both system and book design, but much cleaned up and streamlined, with nice, clear text and better illustrations than the originals tended to have. The combat matrix here, though it looks like one of the tables for Class combat in the old AD&D, works for all classes in a unified table.

ASSH has four main character classes, the usual fighter/magic user/cleric/thief selection, with subclasses for each which are either specialist forms (eg the Illusionist for magic users), or combinations of classes, such as the Warlock fighter subclass who can use magic). 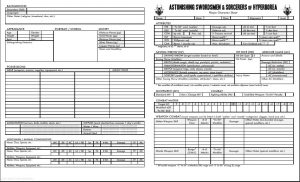 The ASSH character sheet looks a bit daunting at first, but generating a character is easy and as you do so some of the apparent complexity of the sheet becomes clear. For example the two row table in the middle of the right hand side.

Is just your characters chance to hit the various armour classes at your current level. You do not have to consult the chart in the book.

It is typical that my first play of this 1st edition is as the second edition has not long finished its Kickstarter.

I am not going to write up the adventure, because it is a commercial adventure, but I want to write about the experience. It is not really a review of the game, but there will be a bit of reviewing going on.

I ran the adventure “Rats in the Walls” which is for 4 to 6 1st level characters. As the title suggests, the adventure involves rodents. This is the first near straight Dungeon crawl I have run in thirty years and it was a fun return to the past.

The first thing you notice is that there is far less that your character is seemingly able to do. There is no shared skill system which any character can tap into, but instead limited skills for each class, Thieves having the most, but any half-decent DM can fudge uncovered skill areas. Want to jump from the balcony to the top of the tent, roll under your Dex minus 4.

The second thing you notice is how fragile 1st level characters are. Yes, as D&D is still a thing, now in its 5th edition, this will not be a surprise to D&D players but as someone who has played other games for the last 34 years the fragility is astounding. One decent, normal hit from a weapon will kill a character. This is why I had each player start with two characters, in case the first one died.

I said that this was a near straight Dungeon crawl, the adventure has two main acts. The first one allows for role-playing and investigation. I confess to a bit of silliness as the innkeeper started off his involvement by intercepting an old man who was moving to the characters’ table and throwing him out before he could give them a quest.

Reactions during play were fun. Magic users getting used to the idea that they do not have power or magic points that regenerate. At level one they can cast one spell a day, more if they have high intelligence, from their stock of three spells that they start the game with.

Combat was quick, as, at least at first level, a decent hit from a normal weapon will kill any but the luckiest character. It might grind at higher levels but, of course, fighters get more attacks per round at higher levels and the squad heavy weapons team, sorry magicians ;), will have more powerful spells.

Here is a good example of ASSH’s streamlining. Rather than an effect based on some formula, the ability of characters to fight/cast magic is given in terms of Fighting Ability/Casting Ability.

The class level table shows that for each level. For specialists the Ability equals the level but for others the progression is slower.

That Paladin can cast magic, but not until level 7 and then only at Casting Ability 1.

Similarly both Necromancers and Paladins can Turn Undead(*) but less effectively than Clerics.

(*)My wife has always felt that Turn Undead should be just that, become a skeleton, ghoul, lich whatever. 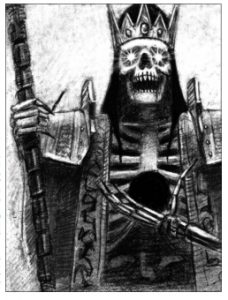 One thing that took me by surprise,  but maybe should not have since we are not a dungeoneering group usually, was the lack of the old habits I remember from when I was a kid.

Checking any wall, floor or altar for traps, secret doors or hidden features. Thinking back it is amazing that more monsters aren’t alerted by the sound of ten foot poles banging off every surface as the party advance along the corridor.

Neither was there scrabbling around looking for precious monetary treasure, for as we know, what does GP equal, that’s right, XP. Tasty, tasty experience points.

ASSH also gives awards for clever ideas as well as slaugtering foes and stealing their stuff, which I think is always a good idea.

I do have a few niggles. Firstly with the adventure. The maps for the building interiors are tiny, squashed into the page count, but around a table top that might not mater so much, using Roll 20 as we were, cutting and pasting from the PDF did not make for good resolution maps.

ASSH, 1st edition anyway, I believe the 2nd edition will be a single volume, comes with two thick volumes each split into different sections. That means that the contents page for each section is at the start of that section. I would rather that it was all at the front of the book. There is an index, but still and all. There is so much in these books that the PDF

The only other niggle is the spell list. Rather than be listed by class or by level they are

listed alphabetically. I think having them split by level and then alphabetically would make things easier to find. This is a minor thing, though having the physical books, as always. is preferable to working just with PDF. This is one I investigated having professionally printed and bound before I was lucky enough to get a boxed set. The only reason I did not buy a boxed set was that it was only available in the US and then you risk a hefty import duty for a boxed game.

Right. Now to prepare for next week’s game, more dark dealings in Hyperborea!

This entry was posted in none yet, Role-Playing Games, RPG. Bookmark the permalink.