Foldable Project – The Battle of Langside 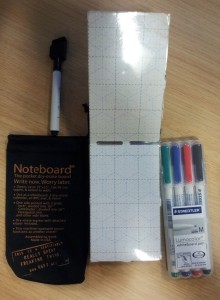 May, 1568. There is tension in the realm of Scotland. Many nobles of the realm are unhappy with the rule of the Queen, whether upset at the scandals of her private life or seeking to exercise more power in the realm by marginalising the Queen in favour of her infant son.

The Queen has fled west to gather forces at Dumbarton. There she can be joined by troops from the Highlands and Isles. She alrady has a large body of troops accompanying her, but they are relatively untrained and their commander is unwell, though still able to command.

The forces of the Regent are better trained, but fewer in number. They have placed themselves on Camphill, near the village of Langside to the south of Glasgow. That hill commands a good view over much of the area, there is no point trying to bypass it as the Regent’s forces can attack the Queen’s if they try. For the Queen to get to where she can raise an army to regain control of the throne, and her son, she must defeat the Regent.

Before deployment a roll was taken over the battle-plan either side would follow. The Regent’s forces commited to one similar to what appears to have happened, they would seize the village as a strongpoint for the hackbutters, and use that as an anchor on their right flank defending along the line of the road to Glasgow.

Historically the Queen’s forces were indecisive, launching attacks on the flanks that were repulsed. They were given the choice of a right strong attack, a left strong attack or a broad front advance. The dice chose the latter. They can’t have chosen to defend, as they are the ones that need to break through, indecision favours the Regent.

It was decided that artillery on a hill could fire directly at any enemy of medium range or more. Both forces left their artillery behind on the hill, as to move it would slow their lines. I don’t think I would allow this again, it wasn’t how artillery were used, and it gives the defender a big advantage. 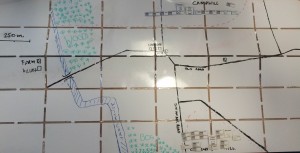 The troops were deployed in a “camp” formation. They would have to spend the first few moves arranging their lines. This is what happened on the day and it allowed for adjustments to the lines.

The Regent’s forces sent the hackbutters forward, aided by Kirkcaldy to seize the village while the rest of the army formed their line. Although the Queen’s army is larger, the large blocks means that the Queen’s army’s frontage cannot be much bigger than the Regent’s. Rather than trying to get round the edges with the infantry, the Earl of Argyll keeps his gentlmen as reserves, ready to plug any gaps in the line. 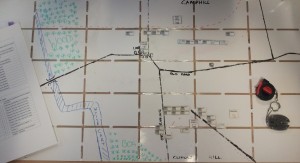 Pausing only to dress their ranks, and get ride of any disorder, the Queen’s forces move on, the Regent has picked his spot, and his forces also have time to reorder themselves.

Early artillery fire is ineffective, save for a hit on the Regent’s unit which causes minimal damage. Once the Queen’s forces have advanced halfway, Herries’s Cavalry tries to hook around the Regent’s left flank to disrupt from the rear, but the Regent refuses that flank and the Royal Archers cause major damage, causing Herries to rout.

Sporadic firing and artillery did some damage to the advancing Queen’s forces, with the artillery thinning a couple of blocks by the time that the lines clashed. The advantage at first was with the Queen’s heavier units, they did not break through, but they caused damage and caused the centre to retreat. Kircaldy, the second commander, positioned his horse ready to try and reinforce against any breakthrough. 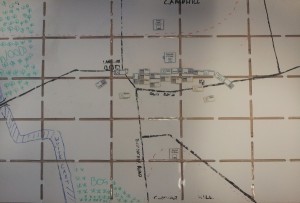 However on the flanks the hackbutters and archers took their toll on the pike blocks, and the Regent brought round his rightmost pike unit to try and hit the unit gaurding the left flank of the Queen’s army. However the real action was in the centre. A counter attack by the Regent’s pike started to break through weakened centre of the Queen’s army and the day was won, the Queen’s army disintegrated, running for their lives.

As the word came to the Queen, she found herself with no choice but to flee south to England and to throw herself on the mercy of the English Queen.

Basic Impetus worked nicely for this, with army details based on the Renaissance Scots army. The Impetus Bonus gives an attacker an advantageso passivity and holding the line won’t help.

The rules are easy to get on with, though I made some errors with unit losses for the large blocks, taking out the front unit rather than the rear unit, but that was easily corrected. I felt they ran quickly and gave an historically believeable result, even as it gave a chance to the losers in this battle. Next time the Queen might win!

5 Responses to Foldable Project – The Battle of Langside