Our Heroes
– Farshad – A merchant adventurer, small of stature, blamed for more than he should be
– Dhran the White – A farmboy seeking his way in the world, owning his name to a brush with fear
– Juan José – A mercenary and healer from the barbourous West
– Jushuur – A mercenary and ranger, deadly in combat, a half-immortal Perim
– Utana – A noble and agent of the Haraxan magistrate Niralha
– Jalabu – A merchant guard with questionable skills from the far south, who thinks Farshad could be blamed for more
– Gunion – scholar and practitioner of mystic arts, currently studying secret tablets in an unknown location, a half-immortal Perim

First again to reiterate, I am running the White Dwarf scenario “Irilian” by Daniel Collerton, but I am adapting it to my style and reducing the almost constant combat, at least in the approach to the city. I have also adapted details to my campaign world. This means that some things don’t occur, or occur in the wrong order compared to the original scenario.

We wound back time and revisited the approach to the city, as it has been a rush at the end of the previous session. Utana and Jushuur ride ahead in case the armed forces that they have seen evidence off on their journey west are camped in siege of the city of Iralun.

The pair ride ahead and both push on when they hear the horns of the city call the dusk shutting of the gates. No entreaties to the guards could induce them to cease the closure of the gates, “more than my job’s worth mate”. While this is going on, the rest of the caravan drew close, and the group contemplated setting up camp for the night, or seeing what the walls and buildings that they see to the south of the road, outside the city, are, and if they will provide shelter, when they noticed that the heavy clouds that had been gathering, amidst thunder and occasional lightning were now rolling south, close to the ground and, at the fringes could be seen corpses, moving, staggering, jerkily but moving, being lead by three demonic seeming figures, indistinct, but less than human, and a monstrous aspect to them.

José shoots at a demon with a silver arrow, but misses, Utana looses another, and scores a glancing blow, which causes the material of the demon to smoke and raises a howl the gates to the south opens and a figure, claws in a blood red cowled robe,  a death’s head visible from under the hood, a bronze skull pectoral over the robe, beckons from the gates. 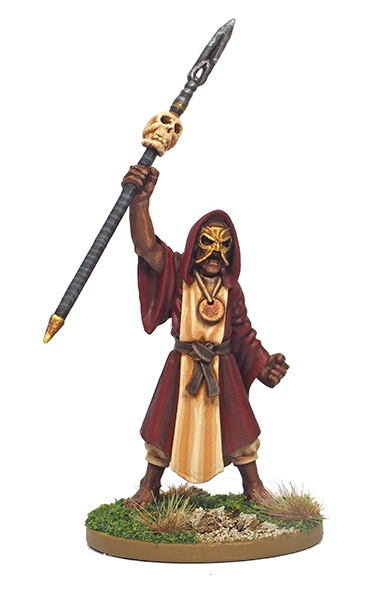 Figure painted by Phil Hendry, that fortuitously fit this non-player character, Tamordiu, Priest of Sikavilmerha, the Goddess who guides the dead on their way.

Given this vision, the group contemplated the options, face the shambling dead and demons to the north, or accept the invitation of this skull headed apparition to the south, they went to the south.As they drew close, the figure stepped to the side to allow the caravan to enter the revealed graveyard, as he held up a hand, and light poured forth, slowing the advance of the dead and their demonic leaders.

As the last wagon entered, the figure croaked for the gates to be closed, and he held the light, retreating into the precincts of the graveyard, the light fading as the gates closed and were barred, the figure staggered and leaned against a fence post as they recovered their breath. The group placed two wagons close to the gates to provide an extra barricade, others placed behind the wall to use as a firing step behind the wall.

The unclean foe came to the wall and gates, but could not  penetrate it, some force kept them at bay. It was not the wall, which was not high enough for a fortification. More arrows were loosed, and some minor damage caused, in return a demon picked up a moving corpse and hurled it at Dhran, a piercing and dreadful howl escaped the corpse as it crossed the barrier of the wall, and it was dead meat when it hit Dhran, knocking him back and winding him.

One of the demonic figures threw a dagger, also at Dhran, again mildly wounding him, and yet more damage was done when he withdrew the blade.

DragonQuest rules have it that any pointed missile that causes damage, has lodged in the body and potentially causes a wound when pulled up. After consideration I am changing this to weapons that cause Endurance damage only.

Another demon hurled a corpse, this time at Utana, the corpse clutching a broken hafted spear ahead of itself life a spike, luckily for Utana, it missed.

By that point the figure, introducing himself as Tamordiu, priest of Sikavilmerha, the Goddess of Death, she who guides the dead on their way, had recovered enough to offer hospitality and shelter. He points out that this is a holy placem, and that the unclean connot enter its precinctsa. He can offer food and rest in his quarters to the rear of the Temple of Sikavilmerha and it was decided that, as the unclean could not penetrate the barrier of the wall, it would be best to move the wagons out of harm’s way, and rest for the night.

Dhran takes the dagger that wounded him, a strange hooked knife with sigils upon it looking familiar from recent encounters, wraps it in cloth and secretes it next to his breast.

Rested, they set off the next morning with the blessing of Tamordiu, heading to the main gate, and the queue of early arrivals for the opening. Some negotiation with the guards and they paid the toll into the city, but resisted the blandishments of some urchins who offered to guide them for pay.

The city, like the trading post, is built on old Hassaryu imperial foundations, this was a provincial capital at one time, and it still shows. The group split, Jalabu accompanies Farshad to the Merchant Factors, where Farshad will collect the payment for escorting the caravan to safety.

The rest go to the Temple of Ghalmerha, their original destination as sent by Harvan, all those many weeks ago, though that may have slipped their minds given recent hardships, with the leader of the Kotharim, Irikdin, who bears a small chest from their cargo, and the tablet and messahe given to them by the Perim who rescued them all some days ago. They and are eventually brought to the Archpriestess, Teralag, who reveals the message of the tablet, just two words, “Dark Rises”

This recalls to her mind, this old rhyme of prophecy,

José recalled the words of the Perim, that a great evil had been in the East, then extinguished, and wonders, how does this relate to the rhyme? If the evil was in the East, then why is it coming from the West. A mystic voice in his head supplied a thought that the Eivil had been in the East, past tense, and they had followed signs of it from there, but that those elements they had followed were heading West, with all signs being that they were part of a larger muster.

Teralag arranged for quarters for the group, and advised Irikdin to take their Kotharim home and prepare for war.

Over at the Merchant Factors, the Kotharim make their deliveries, and receive their interim payment. Farshad takes the group’s fee in coin and gems, constantly aware of Jalabu, and the wickedly pointed knife he toys with, lurking close behind him.

The pair arrive at the temple in time to have their companions fill in what they have missed, and for Teralag to return from contemplation

Dhran asked what aid needed authority Teralag could offer. Teralag looked closely at Dhran, seeming to stare intently at his heart, before answering. Aid she said accommodation and healing she already had spoken of, authority she offered a seal, bearing the similar of her goddess and a request for aid. She emphasised that this was only to be used at direst necessity, and she passed it to Utana as looking the most responsible of the group.

With the first task settled, finding the sage Tamiz, an expert on ancient secrets of the city and who is reputed, for a secular academic, to have some in depth knowledge of forgotten cosmology. was the next order of business This time they were glad of the offer of a young guide, though negotiation was tough, and they found Tamiz’s house, though it was locked.

Rousing a neighbour, they learned Tamiz was usually to be found in the caravanserai known as The Gryphon. A combination of storehouse, pub, shop and trading house, they soon found out that Tamiz was there, unconscious under a table.

Dragging him to his feet and intending to get him home, José was obliged to pay Tamiz’s rather extensive tab. By this point Tamiz awoke and proved to be an emotional drunk, insecure and seeking protection, no matter what happened. He almost needed that protection, as when José, having to let Tamiz go to pay the tab, allowed the sage to stumble and stagger into a Kurrim mercenary, spilling her drink.

The mercenary, Selahak, rose up, as did her eight comrades, and it seemed as if they would vent their frustration on Tamiz. Farshad urged calm, but it was José who quickly headed conflict off by giving the owner of the Caravanserai enough money to let them drink mead for a night and more.

After a drink with their new friends, they took Tamiz home, trying to make themselves comfortable in the unkempt and untidy home whilst Tamiz secreted himself away in his library. The group worry at the sounds of clinking and gurgling and of physical discomfort, and wonder if their sage is continuing to drink themselves to death.

However, Tamiz comes through briefly, pale, sickly looking, holding themselves more upright and confidently, and explains that he is employing an alchemetical method of sobering up, and that he will be fit to speak to them shortly.

And there we left it.

As written, fetching Tamiz from the Gryphon is definitely a bar room brawl, but the way the party handled it should have had a fair chance of working. DragonQuest does not really have social skills or intellect skills like deduction. The player is expected to supply that in role-playing. I am trying to resist the generic roll for luck, but in the case of the offer of mead, there was always a chance that the mercenaries preferred a fight to a drink.

This entry was posted in DragonQuest, none yet, Role-Playing Games, RPG, RPG. Bookmark the permalink.

One Response to Iralun – Session four