Cthulhu write up – episode one

Warning. This is a write up of “Uncle Timothy’s Will” in Blood Brothers. If playing that then stop reading. I have made changes to details

Timothy Hildyson, last of his line, had died. One more death in a harsh and uncaring world, but this man had connections to you

He was a distant cousin of Joan Hildyson, journalist, and an even more distant cousin and some rumoured real father of Doktor Sigismund von Krankenhoffer. For detective turned writer Francis Fitzcarraldo he was a former client and later patron.

These three and three others gathered in Timothy’s house on a lonely hill in the backwoods of Vermont on a wet Friday night. After being served dinner by butler Jamison and the maid Henrietta, they are addressed by Hildyson’s lawyer Charles Turner.

“The will is straightforward and most does not apply to you, but here is the bit that will interest you. Timothy Hildyson has left one million dollars to be shared equally among you. There is one proviso. You must stay in the house until dawn on Monday, if you leave the grounds then you forfeit your share.”

He was asked about this odd proviso and replied that, in his opinion, Timothy was used to using the power his money gave him to force people to do his bidding and this was one last exercise of power. Francis, being familiar with both Timothy as an employer and with Charles as Timothy’s agent felt this to sound like the old man.

With that he sits down and Joan orders drinks. Despite Prohibition, gin and brandy are found. The three others, Sidney the doctor, Harvey the lawyer and Mindy Elizabeth the writer/political radical soon retired to bed, followed by the staff.

Eventually even Sigismund admitted defeat and retired to bed upstairs, the bedrooms for Joan and Francis were on the ground floor. A loud thump alerted the other two who rushed upstairs to find Sigismund on the ground having slipped in a pool of blood. A trail led to a bedroom door, Joan bravely went in as Francis and Sigismund cowered behind her.

There she saw Charles Turner splayed in death on the bed, his guts opened up and lungs thrown down. Even to a hardened beat reporter like Joan that was some sight, and she had to get away to compose herself, away from any other people. 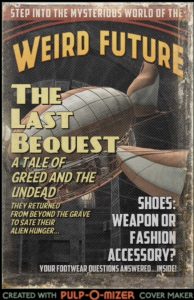 Francis stepped in and steeled hmself against a sight he had no seen since the trenches, but the blood unnerved Sigismund, he ran from the room to his bedroom, stripping off his bloodied clothes as he did so, panting in his room as he got it back together and dressed in clean clothes.

Francis examined the scene more closely, noting small footprints in the blood and that the heart seemed to have been removed from the corpse, the rest of the offal having been discarded.

The commotion roused the other heirs, who hung back from the door of horror and the butler Jamison. The foot size seemed to fit Mindy Elizabeth or Henrietta the maid, but there was no evidence of either. Jamison went to call the police but the lines were down, either cut or flooded out in the rain

Most went back to bed, locking their bedrooms behind them, ready to discuss this in the morning. Our Investigators did not, Joan searched Charles’s room more thoroughly while Sigismund and Francis followed the blood trail and looked in the Library for any sign of correspondence from Timothy that might lead to why someone could be aiming to kill his heirs.

While Joan found that Charles wasn’t an heir like them, having a fixed bequest as a fee for his work, the men found that the blood trail ran out beyond the back door, washed away by the rain. In the Library they found some mildly interesting family history and a rather disturbing copied bit of text from an anthropology work about Australian Aboriginal shaman beliefs about the soul.

That research was disturbed by a commotion upstairs.

Meanwhile Joan heard a sound behind her, to see Henrietta bearing a tray with a glass of gin on it which she offered to Joan. As Joan considered this Henrietta threw the tray at Joan’s head, but missed. Henrietta’s follow up charge was countered by Joan barreling into her and shoving her into the door, stunning her momentarily. As the men arrive up stairs they see Joan thwacking Henrietta on the head with a sturdy shoe.

Charles’s body is covered with clean sheets and the unconscious Henrietta is placed on her own bed and locked in. The three decided to fort up in the library. They have Jamison bring in food, a commode and a screen and say they will leave the house to fetch the police in the morning.

Jamison gently reminds them that they cannot leave the house lest they forfeit their share. Greed lit up their eyes and they tell Jamison to go himself. He mentions that he cannot drive so it will be a long walk, but he will go.

Fatigue and alcohol take their toll, Francis and Joan fall asleep, though Sigismund, not having drunk as much perhaps, stays awake with his thoughts. He is surprised to see Charles Turner’s corpse and an unconscious Henrietta burst through the window, Charles grappling with Sigismund, trying to grapple him down, though Henrietta fails to launch a crippling blow. 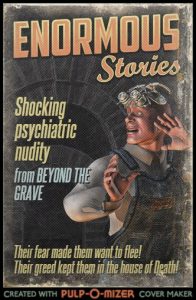 The others awake, Joan picking up a chair and smashing Henrietta sideways against a bookshelf, cracking ribs and splitting her head open and it is obvious that Henrietta is dead.

Francis grabs a dusty old shotgun from the wall and slams the but into Charles and Sigismund picks himself up. The now dead Henrietta rises up and lurches towards Joan, who, picking up a fire iron, slices into Henrietta's head and lays her low.

Panting, bloody and confused, the three consider their options ……

This entry was posted in Call of Cthilhu, none yet, RPG. Bookmark the permalink.