From the rear of the box, they want you to use to use Airfix models, but you can play the game straight out of the box

Better known to modellers and gamers from the British Isles, Airfix have produced military model kits, terrain and figures since the 1950s, being an integral part of the childhood for many British children and their first introduction to playing with toy soldiers. Their 1/72 (closer to 1/76) scale figures have been a cheap entry way into wargaming, though they need a a bit of prep before painting, and in the 70s they published sets of wargames rules and guides. So iconic were they that there was even a video game where you could fly Airfix model planes through household scenes, battling other planes, tanks and looking for pickups. 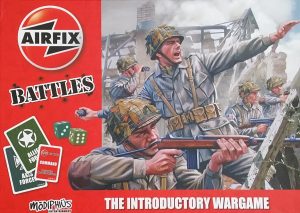 The front of a compact box with the traditional, excellent Airfix cover painting

Now Modiphius, better known for their role-playing games, have issued the “Airfix Battles:Introductory Wargame” as their first published boardgame.This is a platoon level skirmish wargame for World War 2. The game has vehicles and small towed guns, but air support and heavy artillery is off-board and triggered by playing a command card.

In the box you find a book of rules, a book of scenarios, two double sided, interlocking map sheets, three sheets of counters with terrain, troops, vehicles and markers, a bag of ten  (five olive drab, five feldgrau) six-sided dice and  two packs of cards. One pack are unit cards for Americans and Germans,  the other are order cards as the game is command card driven. 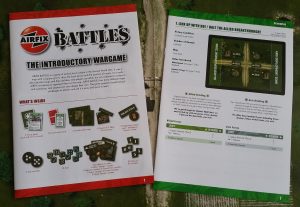 The rules and scenario books

The rules are not long, and aim to start the novice right into it with an introductory battle with each side having a Captain with a group of veterans, and two sections (squads, gruppe)  of basic infantry. Each side starts at the short end of their side of the map and attempts to kill the other, keeping the learning experience simple with orders, movement, terrain effects, combat and cover. 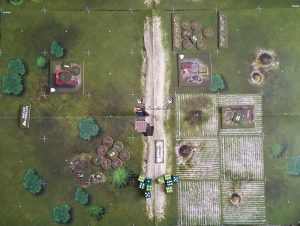 Each soldier has their own figure, a cardboard counter in the case of the set though obviously Airfix hope you might go out and actually buy some of the real things. There is a slight reference made to multiple figure bases, but no game is mentioned, but you could, in theory, use Flames of War or Crossfire bases with this, as well as single figures for games like Rapid Fire. The troop counters have a sort of shellburst icon on the reverse and you can use them as wound markers for based units, so you do not need the 1 figure = 1 troops on based figures. The map is separated into squares and all movement and ranges use these squares without diagonals, so a square next to your unit diagonally is two squares away, not one. 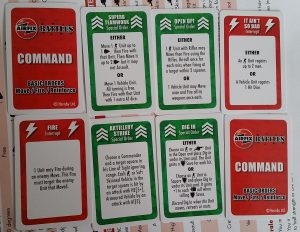 Showing back of cards, with the basic orders you can always use, and some face orders for extra effect

How many cards you can have in a hand, and how many you can play in a turn depends on the quality of your commander, in the basic game you have five in your hand and can play two. The good thing is that each card is double sided, with the back of each card is a standard order, you can Move OR Fire OR Reinforce (if available), but the face side is something special, and often give you two options. This means that, unlike some card driven wargames, you are never stuck with no chance to use your units, waiting for your card to come up in the deck.

Once you have had a couple of turns to get used to the mechanics, the rules are fast and brutal. Troops caught out in the open, not even dug in will be massacred, you only get a save if in cover, and losing troops reduces your firepower. You have limited command and control, in the introductory example you have three units but can only issue two orders per turn, so you still have to think about what you do. There are cards to interrupt your opponents action or to issue one use “buffs” to improve your units performance, but otherwise the turn sequence is “roll for initiative and each side issues and order for as long as they have not spent their play limit”.

American captain with attached veterans and a Sherman. The numbered chits are used to show which unit on the board they represent. A similar chit is on the unit.

The captain shows his “play two and hold four” command capability on the right of the picture.

The dice and figure silhouette on the left of the picture tells you he hits or saves on a 4+ and has a move of two squares. The stars on the top right are the point cost. The icons on the bottom right of the captain explain the units he can command. The one without the band is compulsory, the others are optional. The veterans in the centre are purple which means they have to be attached to a leader, in this care the Captain.

The use of unit cards means that special rules relevant to that unit is on the card right there, for example the veterans above reroll misses against adjacent squares or American Infantry squads get an extra dice against enemy infantry because of the firepower they can bring to bear.

The game is definitely more on the “game” side of the game/simulationist debate, and is intended for fun, for example there is a “valour” counter, initially given to the person who lost initiative, giving one free reroll can be used then passed to your opponent, to help counter rotten luck. Since it is an introductory wargame, the basic rules are introduced in the first scenario as needed as itgoes through the steps of the turn. This works well and without them being awkward to find once you are playing different scenarios.

The some of the additional scenarios in the scenario book introduce other rules, so you get to learn them step by step and there is a point system so you can build your own forces. It is more of a boardgame in some ways than a figure wargame, but I have seen other square based games, such as the ancients game Lost Battles, being played with figures on a normal wargames table quite successfully.

The components are of good quality. The counters are thick and pop out easily from the card sheet. The maps are have the squares marked at the corners rather than ruled lines and have a dot in the centre to make them clear without being too obvious. The unit cards have the lovely Airfix art.

This is a spectacularly quick, and tremendously fun game but is still tactical and rewards paying attention to your units and not doing stupid things with them. There is a lot of thought into making it clear and consistent, right down to both the rules and scenarios book having a copy of the movement and weapons tables on the back page. Each unit has a different flavour thanks to the unit card so you get a good amount of variety. It is an introductory game, and it does introduce concepts like opportunity fire, cover, morale and pinning units, tanks having weaker armour on the sides and rear. It even has a programmed section for managing enemy behaviour when playing solo games. 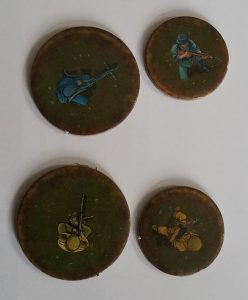 Infantryman and machine gunner.against a white background close to, they are easier to make out

My only criticism is that the illustrations on the troop counters are a bit dark, making it a bit hard to distinguish at a distance, though closer to the dark blue-grey Germans are easily distinguishable from the olive drab GIs and the counters are generic, rather than having the full range of poses from the figures. Then again, they want you to buy the figures. The other issue is for long term play if you don’t want to get into the figures and vehicles, there is no sign that Modiphius will produce countersheets for the new forces they will add to the boxed set. I suspect that there may be new boxed sets for other theatres of war, if so then they may have relevant counters.

Airfix Battles is out now and costs £24.99. There is also a bonus pack of 24 unit cards available for £4.99 expanding the Germans and introducing the British. There are expansions planned and a collectors edition that expands on the base rules and expansions but aiming at proper tabletop wargaming so it will not have maps .

The rules can be obtained for free from Drivethrurpg so you can read them for yourself here.

This entry was posted in Boardgames, none yet, Wargaming. Bookmark the permalink.