Introduction
For some reason I have been inspired  to re fight the battle of Waterloo\La Belle Alliance three years after all the cool kids were doing it.

I will be using board wargames to do this and will follow the same basic plan for each side for the battles to see how the three games compare.

The three games are SPI’s “Napoleon at Waterloo”, SPI’s “La Belle Alliance” from their “Napoleon’s Last Battles” quad and River Horse Games’s “Waterloo: Quelle Affaire”. Why these? Because they are what I had.

Firstly, “Napoleon at Waterloo”. This was marketed by SPI as an “introductory wargame”, often given away with magazines, and my copy is a “print and play” version from Matthijs van der Zanden. It certainly simplifies things even from the early 1970’s state of the art, for a battle famously fought on a ridge, there are no slope/height rules. The only terrain effects are for woods, which block bombardments by artillery, and buildings, which double the combat strength of the unit inside. 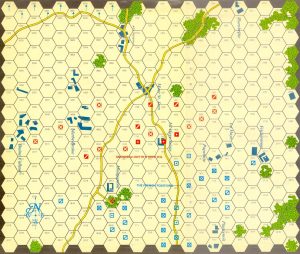 The battlefield, The French seek to exit top left,Allied starting positions in red, French in blue. The Prussians will come in from the east.

The Napoleonic Wars is not my period. So there are nuances of tactics that I will miss, things I should be looking for that I could say this has or does not. The only thing that immediately stood out were those combat strengths. I tend to think of artillery as having a strong punch but vulnerable to assault. Cavalry as exploits of gaps and able to break unprepared infantry. Infantry can hold of cavalry, but to do that then they sacrifice mobility and become vulnerable to artillery. You do not get this sense in NaW. Artillery being able to bombard or support attacks is as close as you get to that combined arms idea.

The French Plan
Knowing that the Prussians are on our right, the last thing we want is to get tied up on the right. Our objective is the Brussels road, which is on our left, from our initial deployment we will shift our force to the left, save for a number of units of cavalry which will advance up the right, to stop the Allies from being able to match our moves and continue to block our advance.

The Allied Plan
Hold the French here, maintain our lines and if we required to give ground then do so  in good order, while keeping the between the French here and Brussels. The Prussians will come. 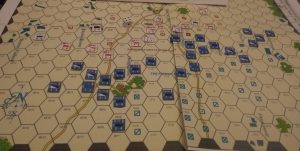 The French start their grand manoeuvre, the Allies act to preserve their defence

The battle opens
The French send cavalry up both flanks, the Eastern move to keep the Allies from shifting to block the Brussels Road, the Western to drive the Allies in. Clearing out a detachment in the woods near Hougoumont, the main part of the Guards start the Westward march. The centre is not to get heavily engaged just yet, just enough to again, keep the centre pinned.

The Allies, refuse their flanks, and hold their centre.

The Allies are being pushed in

The second turn
The French plan continues to have its planned effect, the Allies are being pushed back, and towards their centre. In a purely gaming sense the Allies are using the Zone of Control rules to slow the French advance, as enemies must halt upon entering a Zone of Control. As the CRT favours a defender retreating at near even odds, this works for them.

Not the best picture, but the Prussians have arrived, cavalry to the North, and sufficient strength to hit the French line from the rear, but the French are starting to open up the road to Brussels.

Have the French left it too late to execute their plan?

The French and Allied lines are starting to rotate a bit, with the Western line going back further than the eastern. The French are trying to disengage from the East, heading West without getting entangled with the Prussians. Where the Allies are making contact, the French are retreating if they are able, though the French cavalry on the Eastern flank is getting slaughtered. 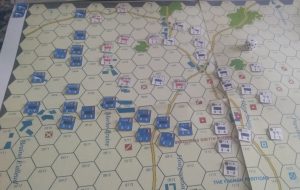 The French are starting to escape up the Brussels Road. The French are continuing their disengagement and heading to the Road, some of the units are forming a line to maintain a corridor behind which other units can retreat.

I think the last vestiges of similarity to the Battle of Waterloo and this game break down here. The conditions have allowed it to become more of a race game where the French are just trying to avoid being touched and made “it”. 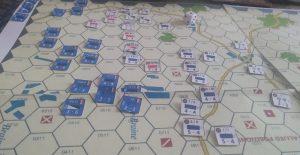 Of the Prussians, only the cavalry managed to hold any French to battle. 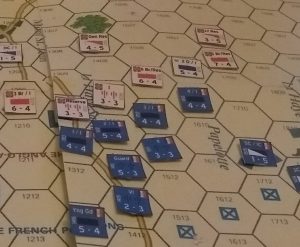 I can see why this simple wee game got used as an introductory game. There are some subtle concepts in it for such a simple and short set of rules.

For example, If you have units in your Zone of Control then you have to attack them, and you cannot ignore any units if it is possible to attack them. In the photo to the right, the French cannot ignore the 6-4 infantry unit so as to concentrate on the 3-3 artillery. This at least stops units attacking others and ignoring the other two next to it.

It lacks any sense of the topography of the ground, strange in a battle where the ridge, however slight, played such a large part in the story of the battle. The only terrain are woods, roads and buildings.

It did not come up in this game, though it came close, but if the French destroy enough Allied units, the Allies are demoralised and fight less effectively.

However, at the end, it was a game rather than a battle. You could have had the same sort of game in a Eurogame with some twee theme. The French actions were not insurmountable as far as playing goes. The Allies could have retreated to just defend the line of the road, spacing so as to allow them to retreat and hopefully force the French back on their turn. That would have been just as artificial as the way this game played out, and somewhat less fun.

It was still a quick game, and I’d play it again, but the next one is SPI’s “La Belle Alliance”.