Saturday 10th Feb I finally got to play the Kings of War wargame against other human beings in a tournament in Stirling. I took my Lord of the Rings Uruk Hai but used the, as the “Kingdoms of Men” faction, a useful catch all that lets lots of historical figure ranges be used in the game. 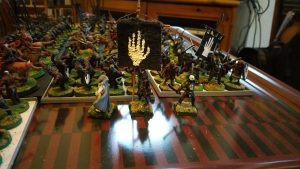 Because I am a Tolkien Purist, my deliberations over my force resulted in no monsters, no flying things, but a force that, wizard and orcish nature aside, would have excited no comment in medieval times, pikes, cavalry, sword and shield armed troops, archers and a couple of ballistae.

I’ll sum up my performance in that I think my army served me better than I served it. My foot guard of heavily armoured Uruks were strong in the attack and defence, the heavy pikemen, when used correctly, defended well and were relentless in the attack, they held their ground, even Sharkey survived an attack by giant eagles! 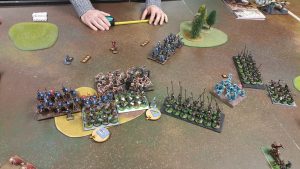 That’s a lot of zombies

My deployment suffered from lack of an effective strategy to deal with flying units. I had ideas about units behind my main line, but it didn’t execute well. In my final game I decided to go on an all out offensive, which worked where I had the strength, but I left my flanks weak, and once the troops there were cleared I didn’t have reserves to keep them covered. The Uruk Hai archers may look tough, but in reality they are Kingdoms of Men peasant archers. There was one battle where they got a useful flank attack, but in general, though they have a higher melee chance than ranged, don’t rely on them on a fight.

This isn’t a battle report,but my thoughts on the rules. The basic troops across the factions work similarly to each other, which is what you need. Infantry is infantry, archers are archers, cavalry in different roles can be shock cavalry or harassers. What keeps them from being too samey though, slightly different statistics, are have the tweaks of abilities and magic items, even in the same faction, your Shieldwall may be harder hitting but your opponents may be more skilled. Then you get monsters, flying things, wizards and weird constructs to bring in the strange and fantastical.

Combat may vary on skill in hitting, or effectiveness in defence, but the deciding factor in does a unit stick around is its nerve, bigger units have a higher nerve, they have more people in them and so survive longer. The disadvantage of the bigger units of course being that they are less maneuverable, smaller units might be able to turn to face a foe where a larger unit cannot. This is one of the places where the abstractions in Kings of War breaks down, there is no way for a unit to reform to, say, column or the like. To be honest I rarely if ever saw that in other fantasy mass battle games I’ve played. 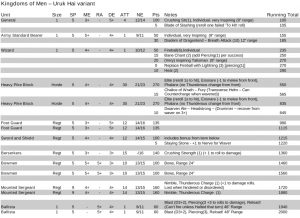 The turn is fast with no charts to consult for combat, all the numbers are on the army sheet. I can seriously recommend doing that, the only time any of the battles I was in hit a snag was when one of the opponents didn’t have his printed army list (against the rules of the tournament, but ach, skip it) so had to keep flipping back and forward to check the stats of his units, I had all I needed for fourteen units one one clearly printed sheet of A4. As the only other numbers involved are modifications to hit, of which there aren’t many and are easily remembered, it wasn’t confusing for a n00b like me. I may not have a grasp of the tactics, but at least I had a fair command of the rules.

I didn’t find not having dice rolls in my opponent’s turn was a big deal, I am supplying info on my units, and chatting and responding to what is happening, so I actually am involved in my opponent’s turn, and once the movement has gone, the shooting and melee go quickly enough, unless huge quantities of dice are involved. 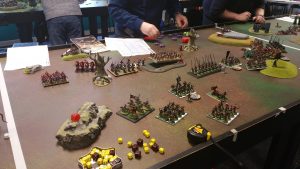 That’s a lot of dice. You need pretty much all of them or, at times, even more

I still think that there is, viscerally, a lot more fun and involvement in picking up and rolling handfuls of dice than checking charts of modifiers for a single die roll. It just seems more involving and fun. The doubling/tripling for flank/rear attacks is nice, and gives me a sense of achievement when I did it to someone else and a big groan when it happened to me. A big groan! I heard that more often than I felt the sense of achievement.

The games were run on scenarios. That I liked. You could get points for destroying your opponent’s army but the win for the scenario was worth more than those for enemy units removed. I know that that scoring structure was for the tournament, and is not the same for pick up/friendly battles just using the main rule book, but it did change the nature of what we were about, mind you, on another table it cost someone a victory for misunderstanding the conditions. At least that is one mistake I didn’t make!

Real life is a bit hectic, and club attending isn’t much of an option when you have carer responsibilities and ridiculously early starts for work, but I want to play this again, both with the army I used here, and with the dwarf army I intend to make for it. You can do a couple of battles in the same time as some older mass battle games, and try stuff out, I do not get the feeling that there are killer lists out there and the support for the game seems committed to keeping a level playing field, not to selling new armies/books for the latest killer army in a arms race calculated to drive sales.

A last word on the environment. Stirling’s Common Ground Games is a decent venue and relatively easy for me to get to. There are plenty of tables there for the players, a cafe that sells a drinkable black coffee, the burgers were so-so but edible, and the atmosphere was not polluted with gamer fug. Wish Glasgow had an equivalent, the only ones I know of are only for card gamers, no harm to them, but not set up for tabletop battles.

This entry was posted in Kings of War, none yet, Wargaming, Wargaming. Bookmark the permalink.