Warning. This is a write up of “Uncle Timothy’s Will” in Blood Brothers. If playing that then stop reading. I have made changes to details.

In episode one we met cousins Joan Hildyson and Sigismund Krankenhofer and detective turned novelist Francis Fitzcarraldo who were attending the reading of the will of Timothy Hildyson, Uncle to the cousins and a former employer of Francis’s.

Panting and panicked by the attack of the dead, our trio start stacking books on the floor intending to wrench the bookshelves off the wall and block the window again, hoping to fort up until Monday and they can claim the inheritance from Uncle Timothy.

However the discussion turned to being more active, rather than waiting to die. Where might be safer, the attic? Either that would be a safer place to hide or they might find the secret of what on earth is going on.

Up to the first floor (second floor to Americans) and to look for the way to the attic and the group is met by Jamison. The group had instructed him to walk 12 miles to fetch help but he had said he would go in the morning and it is not yet daylight.

Francis asked him the way to the attic, “That way sir, at the end of the hall, that door leads to stairs to the attic.”

The door however, did not. It was a linen cupboard, turning in surprise they say that Jamison was being joined by the other three inheritors, Joan’s cousins, all unconscious but with a murderous cast about the way the drool dripped from their gaping mouths.

Francis shrieked and shut himself in the cupboard. Joan and Sigismund sighed and prepare to defend themselves. Cousin Henry rushed Joan, but she skipped aside, raising the poker high, and Henry tripped at the head of the stairs and rushed into the wall of the half landing, breaking his neck.

Sigismund drew a heavy annotated copy of Freud’s “Die Traumdeutung” and slapped Cousin Sydney the doctor with it, the blow hit heavily, snapping his neck instantly.

The rolls of the players were incredible. We found out why soon after this. If you have default skills in Roll 20 but have not actually filled in the space for the skill level, then the roll will come up as “1” every time. We let these rolls stand for this but made sure we did it properly thereafter.

A slash with Jamison’s neck by Joan’s poker crushed his windpipe, while Sigismund grappled with the last remaining cousin, throwing her down the stairs to slump in a heap. Francis looked out of the cupboard and, seeing it was safe, came out of the closet. They wanted to interrogate Jamison but death made that impossible. The bodies were twitching, and they knew that they would rise soon.

Francis stuck the shotgun under Jamison’s chin and fired. The shotgun, which had not been cleaned since before the war, blew up in Francis’s hands, taking a finger from his left hand.

The way downstairs were blocked by twitching and rising corpses, so the trio, thinking something useful might be in the butler’s room, dashed in there and blocked the door. After patching up Francis with bandages made from sheets and Sigismund’s long ago medical training, they conducted a hasty search of the room and chimney finding a gold $5 coin in among the soot and a notebook under the bed. The notebook had two phrases written over and over again, starting neatly and getting more and more deranged until the last few pages are written in what looks like dried blood.

“The Master must live, the master’s brew”

They were trapped in a room with scrabbling at the door, but Sigismund, remembering tales from his Uncle Joachim who served in South Africa with the Natal Police, told on an event in a church station where the soldiers dug through the walls to escape through another room. These walls, of wood and plaster were much easier to get through. By luck, the next room also contained a trapdoor in the ceiling to the attic, and the trio were able, at last to reach their goal.

The attic did not contain any occult horror, however, just dust, boxes and some ropes, obviously intended for a pulley fixed above one of the windows. The way downstairs was blocked, reaching hands were waiting under the trapdoor.

The rope provided escape through the window, down to the doors to the cellar, obviously the pulley was situated so that things could be easily transferred between cellar and attic without going through the house.

The cellar doors opened into a closed off part of the basement, some sort of workshop with discarded tools and copper tubing and a journal.That journal revealed that Uncle Timothy had plans, plans that involved the drugging and subverting of the will of his butler and maid and the sacrifice of his relatives. The bloodbath happening upstairs had been predicted in his journal, though what had happened did not fit with Uncle’s plans, and he intended to come back and at they realised that no one could remember a funeral for Uncle Timothy, or even news of the body. The journal also led them to a stack of banknotes. Not the million dollars promised in the will, but obviously what the resurrected Timothy planned to use to start a new life, well away from the horrors the authorities would discover.

Francis’s keen investigator’s mind tied the copper tubing to the lines scribbled by Jamieson, “The Master’s brew!”. There used to be a brewhouse in the grounds, back when the family brewed their own beer, and made their own tinctures and decoctions for medical reasons. After setting a fire in the basement to destroy the walking dead upstairs, Joan and Sigismund led Francis to the tarpaulin covered ruin of the brewhouse, secreted in the woods to the north of the house. The ground floor was bare but the stairs had been cleared and the stairs had recently been used.

Only Francis dared to go down, and was confronted by strange apparatus surrounding a vat from which rose an abhorrent smell, as if stale chipfat, rancid and overused, was emanating from a chippie renowned for poisoning its clients. Something came over him though, and he invited the others to come down and see the wondrous jewels and precious things. The others resisted his blandishments, and fearing for tangling with a deranged Francis or coming under the spell of Uncle Timothy, they started to chuck rubble and flammable material down the stairs. The first burning torch singed Francis, snapping him out of his stupor and he dashed out. His panting incoherent form almost earned a poker to the skull but he managed to persuade Joan to spare him and he helped complete the task. 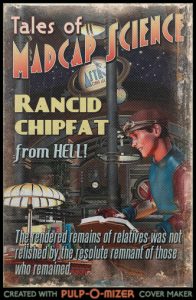 The stench was almost overpowering,but the three walked away, the flames behind him, as a psychic scream ripped through them like a wall of force and vanished. Uncle Timothy, the thing he had become the rendered blob that he had hoped to rise from, had gone.

They got in Francis’s car, split the funds and drove off, hoping to be far, far away before anyone came to see the twin fires. They had survived.

This entry was posted in Call of Cthilhu, Role-Playing Games, RPG, Spoiler. Bookmark the permalink.