Age of Sigmar – thoughts after a run through the game

Games Workshop, recently killed off their long running “Old World” and mass battle game of Warhammer (*), just as they changed the name of the shops to that, and unveiled the new skirmish game, “Age of Sigmar”. This game has new models, a different playing style and is incompatible with the old game.

The rules are 4 sides of paper, free to download, as are several “warscrolls”, army lists to allow you to use legacy Warhammer Armies with the new rules. They warscrolls range from 19 sides of paper to over thirty. The forces of the new game are warbands. Units are not in ranks, but spread out in loose groups as in Warhammer 40K. There are a mix of special characters and units of about 5 if cavalry or 10 if infantry. There are no points systems in this game. A few suggested force makeups but generally you play with what you have. This is open to abuse, rampant, silly abuse, but you just have to hope that the people you are playing are adults.

So, the test game. I made up forces for two legacy armies. 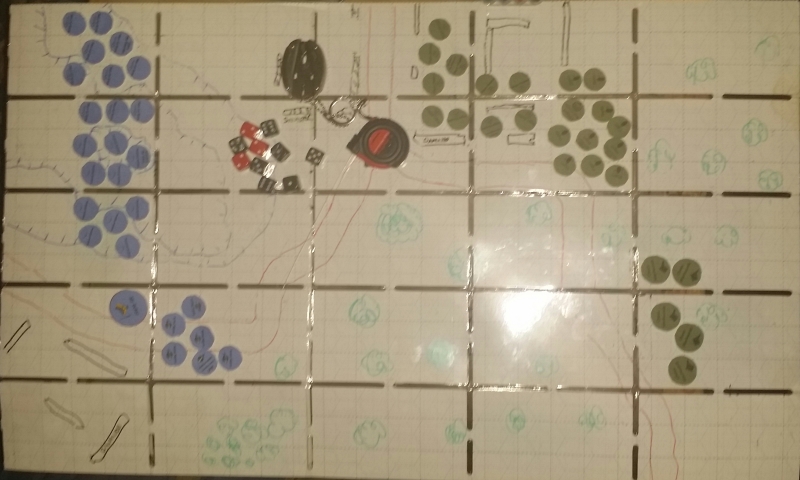 Set up of the battle. Bretonnians in blue on the left, Beastmen in green on the right. Icons based on Redmind A Simonsen’s icons for SPI. The map scale to game maps scale is 1 cm to the normal game map inch. The game maps here is the Noteboard.

Terrain is a hill on the left, some individual trees that do not hamper movement. They have special features that were rolled for after deployment, but they did not make any different to pay this time.

The round is not a strict IGoUGO. During the phases of the round, both will get to move, shoot and fight. This gives the impression that the game is supposed to have the feel of GW’s LoTR game, though that game has more, tighter, rules and treats each figure as an individual,rather than bringing in unit cohesion rules. 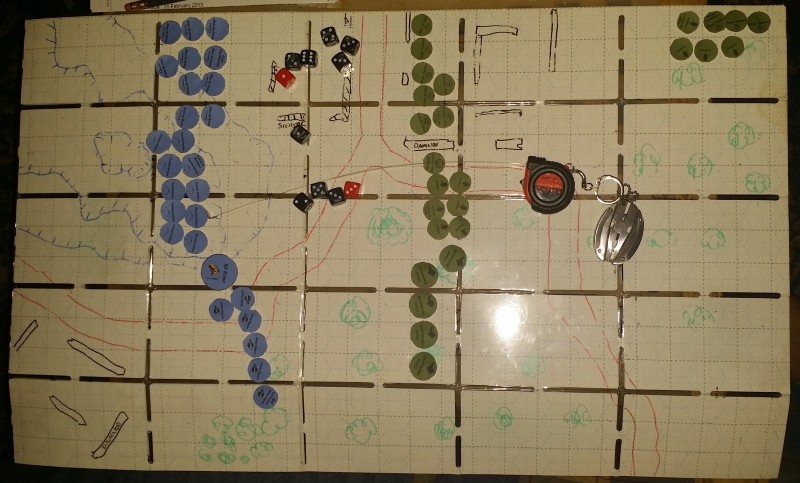 Turn three. The Bretonnians have found that their bows outrange those of the Beastmen, and are thinning their numbers with some lucky archery as the other troops move up

The basic combat procedure of “To hit, to wound, Save roll” remains, but there are no combat tables in this game. All the numbers are on the statline, which makes resolving combats a little faster, though I know experienced Warhammer players had those tables committed to memeory anyway.

One mechanic that this new game has that will make things faster, but which will tend to reinforce luck, is the Battleshock Phases. If you take damage then you must check for shock Fail that and you can lose yet more troops, In the test game, the Beastmen lost three figures, rolled a six on their bravery test and ended up losing a further 5 figures. Since they started off with ten then that round was a bit of an ouch.

In the test game, the Bretonnians had some good rolling and the Beastmen poor, that saw then lose more to failed Bravery tests than losses in combat. 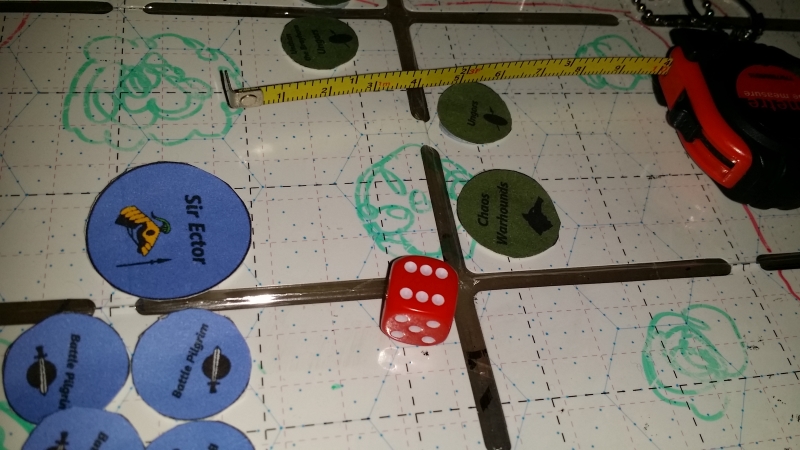 The last warhound in a unit failing its bravery test. The unit collapsed totally in one turn of melee

So. what did I think of it all? Well. It works.The rules are open to abuse and there will be those that will abuse them, but avoid those players if you can. It is not a mass battle system. Warhammer players addicted to mass battles then this is not for them. They should think of it as an entirely different game, because it is. In the long run I assume, but have no evidence to support, that the legacy army support will be dropped.

I think, like the GW LoTR game, that this will have problems scaling up into bigger fights. It has the advantage of units, rather than completely individual figures, so should not immediately hit that scaling problem, but I think it will as people’s armies grow.

If you like a quick, simple skirmish fantasy game and don’t mind doing a bit of the work for limits and situations yourself, then at the moment this is free and available, so why not at least give this a try. You’ve nothing to lose.

(*)  Chaos won. The Old World is swept away. The old races and nations are gone.The starter set will have some humans and Chaos. The humans are gathered from all human nations and are heroes that look like Space Marines. So much so that the term “Sigmarine” has been coined. Your old army is obsolete. There are lists (warscrolls) that will let you play with them for a while, but I suspect they will be depreciated over time.Doesn’t stop anyone playing 8th ed Warhammer (or earlier), but the support from GW will be gone. Other options include 28 mm Warmaster, Knocking together a fantasy version of “Hail Caesar “, HOTT or Kings of War. They released a free 2nd edition rules and Army Lists on Friday. There is a printed version coming out next month that I suspect will have more

This entry was posted in Wargaming and tagged Folding, Warhammer. Bookmark the permalink.